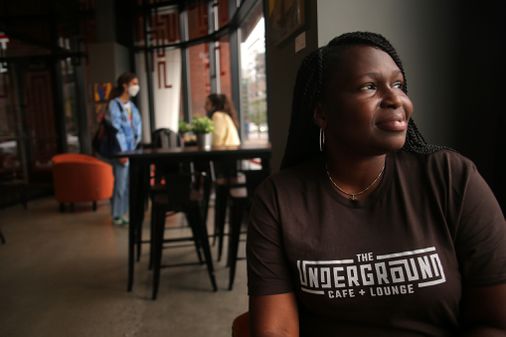 The restaurant has come together thanks to ACC’s new Neighborhood Business Nurturing program, an effort that promises to help strengthen local businesses, especially those owned by women and people of color. Northeast administrators say it’s recognition that the university must use its deep pockets to support neighboring communities. And this is one of many similar initiatives for small businesses that will be rolled out to universities across the region this fall for the sake of diversity and inclusion.

The $ 153 million LightView dormitory – among the first in a wave of privately funded student housing projects in Boston – had been a flashpoint in Roxbury for years. With 825 beds starting at around $ 1,300 per month, many neighbors feared this would increase rents and result in displacement. The university retorts that the creation of more dormitories decreases the demand for existing accommodation in Roxbury. Either way, the first floor retail business would inevitably become the face of the building for the surrounding community.

Finding the right “dance partner” that would work for both students and Roxbury was equivalent, said John Tobin, the university’s vice president for municipal and community engagement. Especially after last summer’s racial calculation over the death of George Floyd, and pressure for local institutions to support communities of color by diversifying the people they do business with.

â€œEveryone in light of the events of the last year has taken stock individually, especially institutions like Northeastern,â€ Tobin said. â€œSometimes you say, ‘How can we do better here, and how do we really help our neighbors and work with our neighbors? “”

Grace – who, in addition to owning Darryl’s, also co-founded the Boston Black Hospitality Coalition – was an inspired choice, said Tobin; everyone in Northeastern knows their food. But it was Grace who helped shape the partnership, which ultimately led to the creation of the ACC Small Business Program, which is being piloted in Boston.

That’s because when Northeastern first approached Grace, they came up with a pop-up restaurant, one where she cooks her food on the street and serves it on-site in the dorm.

â€œIt was like okay, we run a full service restaurant and what you’re asking us to do isn’t realistic, especially if you ask us seven days a week,â€ Grace said. She pushed the university to invest in her and then to do the same for other women and business owners in BIPOC.

Ultimately Northeast and ACC agreed, linking Grace to developers and designers to build a permanent space. Working with Grace led ACC to create its new small business initiative, said Rae Pearson, regional manager of the developer. She said they intended to use a similar model to bring other local small business owners into a second dormitory project they had planned in Northeastern.

â€œWe’ve assembled a team of resources: planning, project management, marketing and mentors, you name it,â€ Pearson said. â€œThe conversations we were having directly with Nia led us to this revelation that we needed to do more to help small businesses support wealth and generational spendingâ€ in the neighborhoods in which they are building.

The business has designed a lease that allows Grace to operate on rent free at first, then ramp up as her business takes hold. Jessicah Pierre, communications director for the Black Economic Conference in Massachusetts, said that was the type of support institutions like Northeastern should provide.

â€œThese universities also have a responsibility to invest in our communities economically and culturally,â€ she said. “Especially for students of color looking to stay in touch with people who are like them.”

Now they can grab Grace’s Cajun tomato flatbreads, red velvet waffles and seafood okra for breakfast and lunch. The venue will host events in the space throughout the week, and its walls will serve as a revolving exhibition space for nonprofit teens. Artists for Humanity.

Grace said she was thrilled to serve both her community and the university.

“I have seen the neighborhood change radically without being able to ask the powers that are the real agenda or the real reasoning,” she said. With the reach of Northeastern, â€œI designed my first restaurant in this project. We have gone from the pop-up to the real new brick and mortar.

And other local universities are launching similar programs.

Across the river in Cambridge, the Massachusetts Institute of Technology takes a similar approach in its new Launchpad Dining Room in the Stratton Student Center. Through a partnership with the CommonWealth Kitchen food incubator, the university now hosts three immigrant-owned food businesses: Bibim Bom, Las Palmas and Carolicious. Together, MIT and CommonWealth worked with student representatives to choose the types of food they wanted. MIT rents the dining space from CommonWealth, which then sublets it to restaurants, with rents tied to their gross income.

The university said the move stems from the July 2020 announcement by President Rafael Reif that MIT would work with more minority-owned businesses as part of its efforts to combat systemic racism on campus. The school plans to host up to seven businesses through the partnership as it grows.

Jen Faigel, executive director of CommonWealth Kitchen, said having a turnkey operation on a college campus is an incredible opportunity for the small business owners she works with.

â€œBasically they come in with their pots and pans and the space is set up and there’s a built-in clientele,â€ she said. â€œThere is a huge opportunity for these companies to build a strong business and team and operational capacity to take them to the next level. “

Faigel focused on harnessing institutional finance as a way to help support small businesses, and worked with Harvard, the University of Massachusetts, Boston College and other local schools to put sauces in moles and peanuts prepared by its chefs belonging to immigrants in their menus. She said she is now working with Sodexo to do the same for Colleges of the Fenway, and anticipates a rollout of the incubator’s products on campus convenience menus and stories early next year.

Faigel said the confluence of COVID-19 campus catering contracts, the struggle to hire workers and the calculation of structural racism have all made universities wonder how they can do better, and she is glad that as an established non-profit organization, it was able to step forward and help.

â€œWe see this as a really powerful model of economic development on the recovery side to support these businesses,â€ Faigel said.

For Grace, opening The Underground with Northeastern as a partner is important, she said, in that it is a model of how other schools can better support the communities in which they are. are found.

â€œIf I hadn’t been through this space, I would never have known it,â€ she said. “We were never on each other’s agenda.”

Now, she can’t wait to build a restaurant that brings the two worlds – the students and the city around them – together.

“It’s one of those places that really bridges that gap.”