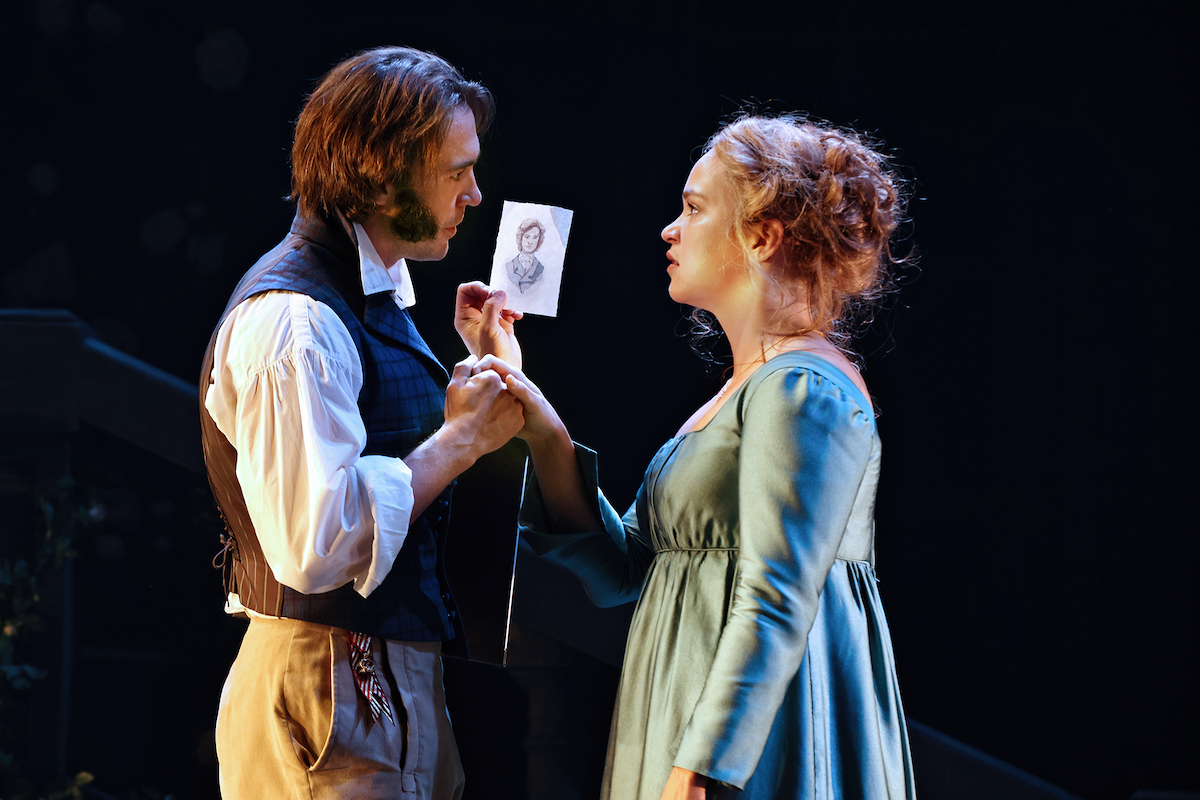 It is a universally recognized truth that if, in a drama of the 19th century English period, a man and a woman first look at each other with haughty disdain, they will eventually realize that they are hopelessly in love. True to form, the traditional romance genre likes to start with a spirited contempt.

This is true of The tenant of Wildfell Hall, last novel by Anne Brontë published in 1848 under the pseudonym of Acton Bell. In Emme Hoy’s adaptation for the Sydney Theater Company, it’s clear in their snootly indifferent first interaction that Helen (Tuuli Narkle), the titular tenant, and burly Gilbert (Remy Hii) will end up in arms one on the other, perfectly matched in intellect and mutual respect. But this tale, under yet another masterful direction by Jessica Arthur, carries far more potent and sobering social political freight beyond the elaborate dramas and dramatic ironies of lovers’ confused hearts.

Powerful and, in its time, shocking, The tenant of Wildfell Hall was one of the first feminist novels. Graphic in its realistic depictions of alcoholism and violence, it is the story of a female survivor of domestic violence, who defies not only the social conventions of the time but also the law to flee her abuser with her young child and live independently by it. his own ways as an artist, on his own terms, while carrying the secrets and scars that daily destabilize his existence.

This proposal was so scandalous that after the death of Anne (at only 29 years old), Brontë’s own sister, Charlotte (of Jane Eyre legacy) banned its republication in England for several years. Yet the story had already achieved phenomenal success. Even now, nearly 200 years later, his themes are rubbing raw. As Roe vs. Wade’s American recall on opening night made clear, a woman’s body and destiny are still not hers. Its autonomy is still ambushed by outdated ideas about gender roles; its rights subordinated to the selfish and grossly illegitimate power of men.

by Bronte Wildfell Room is a largely epistolary novel – written as a series of letters structured in three parts, with the midsection of Helen’s diaries during her years with her increasingly alcoholic and unstable husband. A certain stylistic continuity with Brontë’s novel is maintained by Gilbert’s intermittent narrative commentary, which comes in spurts and is largely absent from the second half, only to be reminded somewhat hammily in the final line.

That peccadillo aside, Hoy’s reworked version for the stage is a truly impressive feat, vividly and elegantly alternating between these two phases of Helen’s life to create tension, pathos and intrigue over time. almost three hours of the play (which really flies by – I was honestly dreading the long sit). On a rotating level stage, we jump between the past and the future, with most of the important actors simultaneously jumping between roles. As the two worlds apart come together, the playwright deftly breaks down the larger puzzle of how Helen, the beloved “good wife” at first, found the courage to leave.

Narkle is as fierce and charming as a rose like our heroine, and convincingly displays the emotional turmoil of a woman trapped but bitterly battling gaslighting, victim blaming, misogyny and gender roles. hyper-supervised integrated into his society (including those who are imposed on him). young son, played by Danielle Catanzariti). Arthur Huntingdon (who critics have noted bears an uncanny resemblance to Brontë’s brother) is a calculating, drunken brute under Ben O’Toole – the unabashed embodiment of poisonous chauvinism who sees no reason and suffers no consequences for being less than the bully he is allowed to be. Like most abusers, he is both terrifying and pathetic. Hii’s Gilbert is also sexist at first, but not so far that his ideas about gender cannot be repurposed. Through his increasingly frequent dialogues with Helen, he learns that his assumptions of male superiority and functional marriages are narrow and cynical. In parochial England, it is his and the other characters’ ability to change – to see themselves and each other in a new light – that defines the play’s moral ideal. (For all its darkness, Wildfell Room ends as a romantic fantasy.)

The entire cast gives standout performances – from the ever-seductive Anthony Taufa (as a recovering drug addict and mysterious landlord), to Nikita Waldron (who plays two similarly cunning women, capitalizing on their sexuality to achieve what little power they can), to Eliza Scott (whose two characters also mirror each other, both being kind-hearted allies who have been tricked by the patriarchy into underestimating their worth).

Hoy’s screenplay is interwoven with acerbic, amusing lines that travel the centuries to mark modern sensibilities, and there are dozens of little quirks in design and direction that make audiences laugh out loud. For example: Steve Rodgers as a Reverend literally opening a raw egg on stage and sucking out its contents. Or a tiny little cross popping out of a spinning chimney to suggest the building is now a church.

One of my favorite lines, uttered sarcastically by Helen after a particularly despicable male rights scene, is: “You really are a glowworm among worms.” (In her note to the text, Hoy writes that she added “a hint of irreverence…I think [Brontë] was a bit of an irreverent writer herself – so I hope she doesn’t mind. “)

Renée Mulder’s period costumes are beautifully designed and suited to every character – from the severe black fan of Helen’s aunt’s bonnet, to Gilbert’s rather sexy high boots, to the simple Mary’s faded blouse and Scott’s self-mockery. Sound designer Clemence Williams subtly adds light and dark nuances to scenes with bright strings that quiver, strum and rhythm the air. Elizabeth Gadsby’s setting (significantly reconfigured in the second half) is an impressive construction, showing the interior and exterior of a gray stone mansion, with greenhouse-like partitions allowing the audience to peek inside and out. eye inside. Increasingly heavy Gothic mists swirl around its peaks.

Just before intermission, we discover another talent in Scott’s wheelhouse. Seated at the piano in a performative space both inside and outside the character, she plays and sings live, while a technician behind the scenes layers her voice in mournful and tender harmonies. It’s a song that makes you catch your breath with its beauty. It is also like a balm to hear the female voice – so often used in the play as a necessary weapon of daily warfare to defend, appease, deflect and prevent male violence – in free, independent and vulnerable expression.

Written by Hoy in his late twenties – the same age as Brontë – this production of Wildfell Room is an invigorating, insightful and entertaining contemporary retelling of a provocative feminist classic. I was surprised and depressed at how relevant it seemed.

The tenant of Wildfell Hall plays at the Ros Packer Theater in Sydney until July 16.