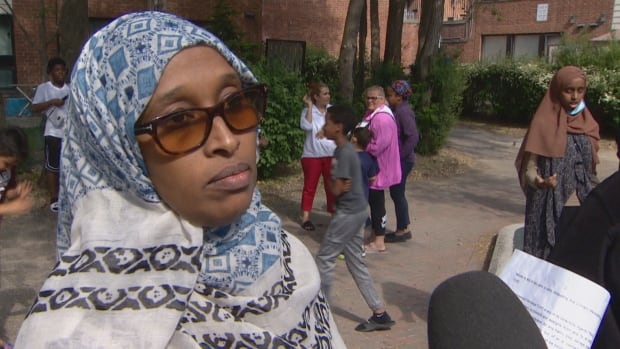 All tenants are being temporarily moved out of a Toronto Community Housing (TCH) complex in the city’s west end after part of a bedroom ceiling collapsed in a unit and seriously injured a woman.

Some Swansea Mews tenants have already been moved to dormitories at Humber College Lakeshore or Toronto Metropolitan University campuses while TCH, with the help of engineers, determines the extent of the problem.

The ceiling collapsed in a townhouse in Block H and landed on the woman early on May 27, sending her to hospital. About 420 people live in the complex.

According to TCH, residents will be away from their units for approximately two weeks while the issue is resolved. Originally only block H tenants were to leave, but now all tenants in all blocks are moved. Swansea Mews is a low rise complex on Windermere Avenue near the Queensway.

“We recognize that this is a significant disruption for people,” TCH spokesperson Robin Smith told CBC Toronto.

“These are people’s lives. They have children. They have pets. Some people have special needs. We are very sensitive to them. We are also sensitive to our responsibility to take the best possible care,” said he added.

“We’ll do our due diligence. We’ll try to get people back as soon as possible. But we’re not going to cut corners. We’ll make sure we get all the answers.”

Swansea Mews in critical need of repairs in 2015

Smith said every unit in Block H must be inspected because an engineer’s analysis concluded that the cause of the ceiling collapse could date back to when the building was constructed.

In 2015 there were indications that Swansea Mews was in critical need of repairs, he said. As a result, TCH developed a ‘reset programme’ in 2016 which called for a ‘deep refurbishment’ of three TCH communities, including Swansea Mews. Smith said the program was unfunded.

However, TCH had planned a “deep refurbishment” of Swansea Mews in 2023, meaning the agency had a plan for the complex before the ceiling collapsed.

In a statement, TCH said engineers who inspected the unit where the ceiling collapsed recommend testing ceiling materials in all buildings in the complex. Before the tests take place, temporary structural supports will be installed in each unit as a preventive measure to avoid another incident.

“Test results will determine when tenants can return to their homes,” TCH said in the statement.

Smith said TCH is committed to ensuring residents have the best information while their safety is a priority.

On Friday, dozens of residents gathered outside the building and expressed their frustration with the situation. A few said that the building had been in need of work for some time, that TCH management knew repairs were needed, and that it was TCH’s responsibility to ensure the building was safe.

Ubahagi Abdi, a tenant since 2004, said TCH had known Swansea Mews had been in bad shape for years. Tenants need proper information to have peace of mind, she said.

At Humber College, the dormitory does not allow pets. Many Swansea tenants have pets.

Tammy White, a resident for 12 years, said tenants were not given enough notice before being asked to move. She added that there was not enough information and that the “no pets” policy was difficult to manage.

“People go through pure panic, terror. I mean, I have kids, I have pets. I was ready to go – it was no problem. But when you say that about my animals, I can’t do that,” Blanc said.

On the Humber College Lakeshore campus, some families are spread across multiple rooms without a stove or oven. But TCH said it has full cafeteria access, meals are provided and packed lunches are available for school-going children.

In a statement to CBC News, the Toronto District School Board said it was providing support to families, including arranging transportation to schools, providing TDSB community support workers and providing products. groceries to affected families.