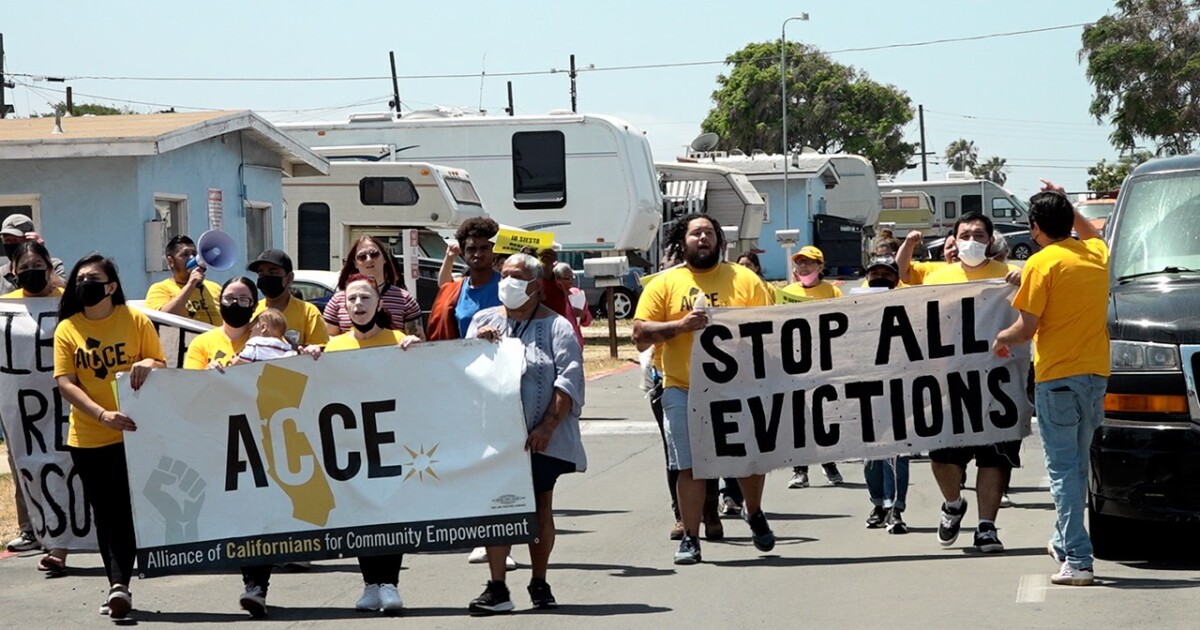 IMPERIAL BEACH, Calif. (KGTV) — On Wednesday, dozens of RV renters in Imperial Beach rallied against what they say were unfair rent increases and evictions from their new landlord at Siesta RV Park.

Some of the tenants are part of the San Diego chapter of the Alliance of Californians for Community Empowerment (ACCE).

Outside the RV park, people chanted phrases like “Yes we can” in Spanish and “Fight, fight, fight. Housing is a human right.”

Some were holding a large banner that read “STOP ALL EVICTIONS”.

One by one, the tenants talked about their experience living at the RV park.

“As a senior citizen and disabled veteran, I shouldn’t have to worry about not being able to pay my rent,” one man said.

“No one here can afford to live outside of this place. That’s why we fight for it,” said Juan Nevarez.

In January, the RV park was sold to Miramar Imperial Beach, LLC.

Nevarez, who has lived in the RV park for ten years, said they now face rent increases. They will also have to start paying water, sewer and garbage charges.

“The funny thing is that none of these things can be measured because we don’t have meters,” Nevarez said.

The new tenants said they were subject to a six-month rule that they had to move their motorhome off the property every six months for two days.

“I decide to leave it on the street, which isn’t safe. It’s my house. It’s all I own…everything.” said Rachel Orckcso.

Tenants’ demands include an end to the six-month rule, a limit on rent increases of no more than 3%, and more transparency about how fees are charged to them.

When 10News approached management on site for comment, the office was locked and a woman inside refused to speak.

“I would like to see, at the very least, that they do some type of program where they can treat people better, and we can have some type of dialogue with management,” Nevarez said.

Tenants are also calling on the city to pass tougher rent protection orders.

Miramar Imperial Beach, LLC did not return a call for comment from 10News.