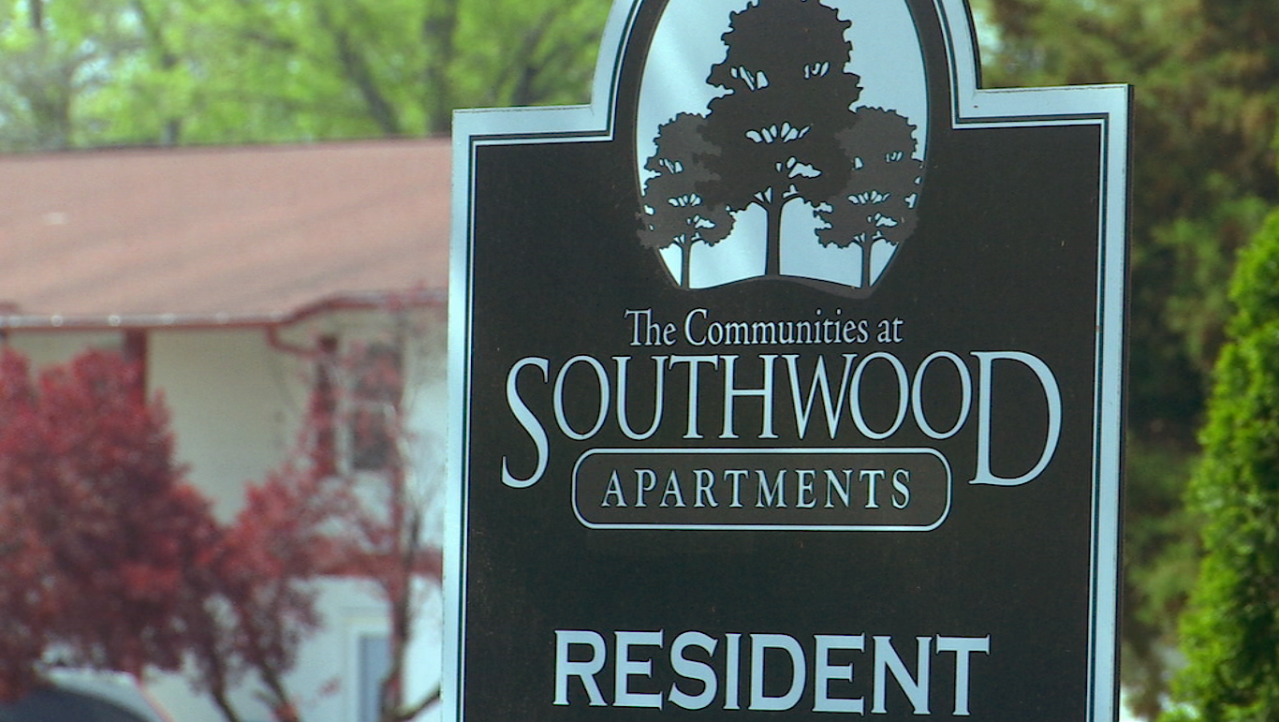 Xitumul says a team came to fix it recently but it only took four days to stop working again.

In the next room, where an expectant mother sleeps, Xitumul says insects come out of cracks in the floor at night. Strips of black tape cover the cracks as a temporary fix.

Down the hall, Xitumul uses a wad of duct tape to plug a hole in the closet where she says the rats make themselves at home. She holds a banana and a mango with bite marks and jokes that her dog doesn’t like fruit.

Xitumul says pests have been a problem since she moved into The Communities at Southwood, Richmond’s largest Latino neighborhood, about five years ago. She says the issues were never fully resolved, despite regular maintenance calls.

“They just give out rat traps like the ones over there,” translated Sofia Vega, an immigrant justice community organizer with the New Virginia Majority. “She’s exhausted from constantly having to ask maintenance to help her fix the problem and then they just tell her they don’t have the staff or they’re too busy or they’ll check in later , but they never do.”

Just down the street, mother Sindy Cabrera worries her microwave is catching fire. She says her toilet won’t work without a mess.

“Everything will come out of where that black tape is,” Vega translated.

Cabrera said she’s been waiting over two months for maintenance to fix it, but she’s not holding her breath. Frustrated with inaction in the past, she says she used her own money to fix her flooded tub and sink.

Mother Natalia Najarro says she constantly cleans mold from her bathtub and now she worries about a crumbling ceiling that is collapsing. She cut a pool noodle in half to block the space under her door where she says pests have already entered.

Vega said advocates have heard hundreds of similar stories from tenants here. They held a rally alongside locals pushing for change in November last year.

“I think that’s why they go out and fight every day for better repairs because obviously as a mother or father you don’t want your child to live in conditions like these. where they are worried that bedbugs, rats or cockroaches will crawl on them when they sleep or even bite them, or that the mold and dampness they live in will give them some type of disease like asthma Vega said.

That fight suffered a setback earlier this week when Gov. Glenn Youngkin rejected a bipartisan bill that advocates say could be a big help in situations like this.

Delegate Marcia Price (D-Newport News) sponsored the bill after hearing about issues in her own district.

“The justification that was given for the veto is not factually accurate,” Price said in an interview.

Price said that currently localities have the power to condemn properties, which risks worsening the shortage of affordable housing.

Alternatively, they can sue for a fine, but that’s also a problem, according to Price. She said the money goes to localities — not tenants — and often doesn’t cover the full cost of repairs.

Price said this bill would make a difference because it would empower localities to impose repairs and allow them to take action against an entire apartment complex faster than a private attorney could.

“It’s really about the owner fulfilling their end of the contract and that’s exactly what’s not happening,” Price said.

“VAMA strongly believes that both landlords and tenants have a responsibility to maintain premises in good condition, and our members constantly strive to maintain the highest quality rental accommodations available. To that end, VAMA worked with supporters of the bill on amendments that preserved the intent of the bill while avoiding unintended consequences,” VAMA Executive Director Patrick McCloud said in a statement. .

The General Assembly could override Governor Youngkin’s veto at a session scheduled for April 27. Price worries they don’t have enough votes.

If the bill becomes law, it is not yet clear whether immediate action would be taken against Southwood. The City of Richmond’s Property Maintenance and Code Enforcement Division did not immediately respond when asked if the property had any complaints pending or closed.

Carroll Steele, Southwood’s property manager, took no position on the legislation and declined to be interviewed.

Instead, Steele referred our request to long-time residents who say they are satisfied with the living conditions.

“When I request repairs, they are done almost instantly,” said Tina Idlet Tonzo, who has lived in Southwood for six years.

“The place has changed since it was before, so I think it’s a good place to live,” said Oscar Espinoza, a nearly 17-year-old resident.

Mark Hubbard, a spokesman for Southwood, said it had increased maintenance staff by 50% since a Richmond Times Dispatch survey last year led to an investigation into housing discrimination by the former Attorney General Mark Herring. Hubbard said there are currently 15 people working full time.

Hubbard said they had just completed evaluations of the more than 1,300 units. He said they had already resolved several hundred issues which he described as minor and expected to resolve a backlog of more complicated repairs by the end of May at their own expense, regardless of be the cause. He said there were over a hundred on the list.

Hubbard said they also hired a contractor to do ongoing pest control. He said they typically visit 45 units a week and he doesn’t believe there is a waiting list.

“By collecting this data and speaking with residents, we discovered that over 70% of the issues detected had not been previously reported. Part of our outreach is to help inform residents of exactly who to call and what to do when they need maintenance in the future, even if they receive this information upon moving in,” Hubbard wrote in a E-mail.

Although Hubbard was unable to release details without the tenants’ permission, he said it was “factually inaccurate” that Southwood had done nothing to address the issues reported by the three tenants to whom we spoke for this story. He noted that at least two had not reported a pest control problem in the past six months and had carried out several work orders in these units, although he acknowledged that there were. still pending.

Lawyers say many tenants are wary of the property manager’s promises.

While the progress may look good on paper, they fear the fixes are band-aid solutions to long-standing issues.

“These are horrible living conditions and no one who pays rent deserves to live in a situation like this,” Vega said.

Banks are trying their luck with the metaverse. here’s why