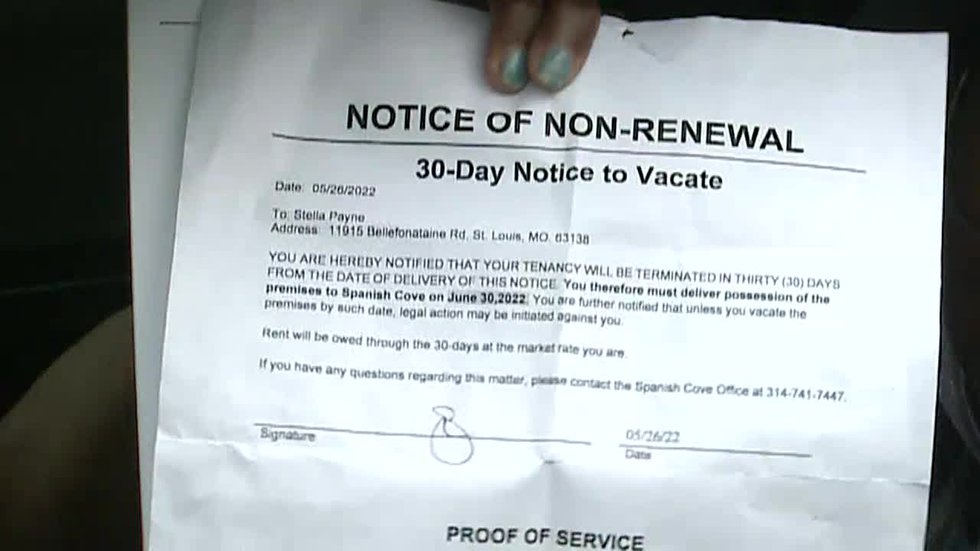 “I just want to know why”; Spanish Cove Evicts Tenants Without Explanation

ST. LOUIS COUNTY, Missouri (KMOV) – Residents living in a North County apartment complex are wondering where they will be living by the end of this month.

Tenants of Spanish Cove Townhomes say management is forcing them out of their homes without explanation.

“I just want to know why,” said the tenant, Eva Brown. If they had to, they should have given us more time.

Brown, like many others, received a 30-day furlough letter in her mailbox from management. She has to move out after having brain surgery in 3 weeks.

“You still have to pay them that month’s rent and then find a place to go and pay another rent. People don’t have that money,” Brown says.

Stella Payne has lived in Spanish Cove Apartments for 20 years. He is told to pack his bags in June despite his lease ending in October.

“I’ve been packing since I got that note and I need help because I’m on oxygen,” Payne said. For them to just stick it in your mailbox and give you no explanation, it’s just not right.

“We are being disenfranchised because it doesn’t make sense without proper notice,” says tenant David Coon.

According to the Better Business Bureau, resort owner Pepper Pike has an “F” rating along with a list of complaints. As for the stuck and confused residents at Spanish Cove Townhomes, many are nervous with no place to go.

“Give me at least two months to find something.”

News 4 contacted management for this story, but those attempts were unsuccessful.

Finalization of the real estate transaction