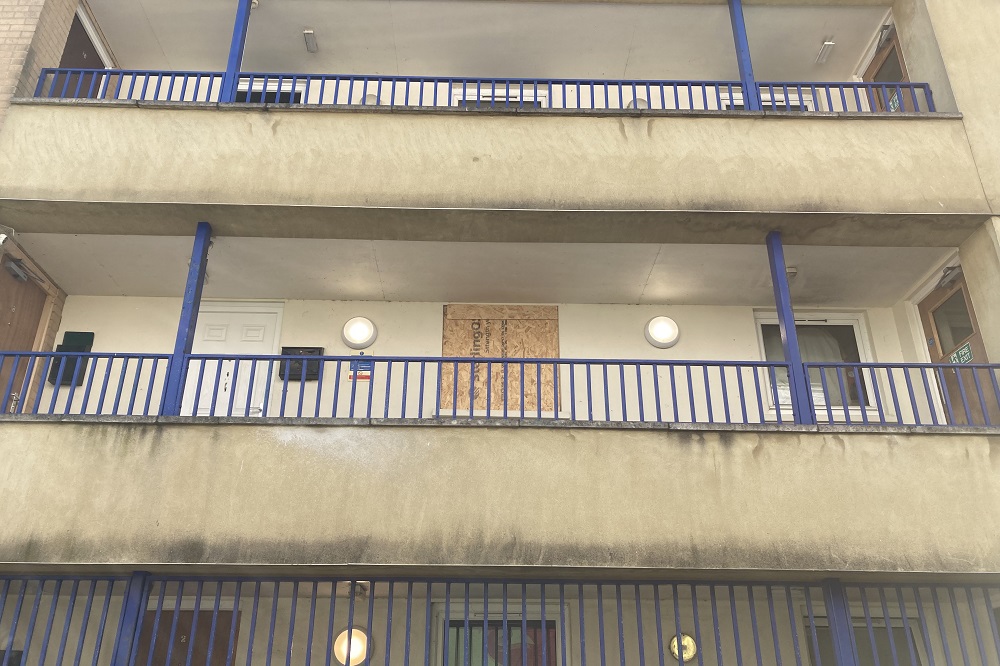 Tenants in a block of flats in Swansea have claimed drug activity and anti-social behaviour, including the use of communal areas as toilets, have made it a ‘dirty’ and ‘awful’ place to live “.

And they allege the landlord – housing association Caredig – is not doing enough to address the issues.

One of two Regency House tenants who spoke to the Local Democracy Reporting Service, is staging daily protests outside Caredig’s headquarters.

“It’s a nightmare,” the 55-year-old said of life in the apartments.

The tenant doesn’t want to move out, in part because he feels protective of two older residents.

A spokeswoman for Caredig said staff regularly visit Regency House and speak to residents, and have and will continue to proactively manage anti-social behavior at its properties.

South Wales Police said they had received a number of calls from residents of Regency House and Caredig, mainly about suspected drug-related activity and anti-social behaviour, and that they had made seven arrests related to drug-related activities in the past eight weeks.

The disabled tenant moved into a one-bedroom apartment in Regency House 11 years ago.

‘It was great – a good place to live,’ said the tenant, but alleged drug activity in the building appeared to have started before the March 2020 Covid lockdown and had since worsened and that people who did not live there gained access to and use of common areas as toilets.

About two years ago, the tenant said a drug addict had tried to force his way into the apartment and that “the only way to stop him was to give him a beating”.

Residents say they raised their concerns with the landlord and that a meeting involving four residents and two Caredig staff was held on April 5 this year, but nothing has changed since.

The tenant says that although he lost count of the number of calls to the police and was cursed at this week by two non-residents sleeping inside near the main door, they had no want to leave their home, adding “I will stay. I won’t let anyone harass me or step on me.

The Local Democracy Reporting Service received footage showing a man and woman sleeping on the ground in a communal area, as well as photos of drug paraphernalia. Two of the building’s windows are currently boarded up.

Another Regency House resident, who asked not to be named, said police raided the building “at least once a week”. The man also alleged that drug-related activity had taken place. He cited other concerns.

“The screams are all night long, especially on weekends. People are shouting towards the building. From 2 a.m. to 6 a.m. on Friday evening, it is totally prohibited.

The resident said he was in regular contact with Caredig, but the situation had not improved.

He claimed the building was in a dirty state, with flies sometimes swarming in some areas.

Asked to respond to the issues raised, a spokeswoman for Caredig said: “Caredig has and will continue to proactively manage instances of anti-social behavior in the homes we provide.

“We regularly visit Regency House to speak to residents, and where concerns have been raised we have responded in writing to all tenants, setting out the action we have taken.

“We are working with the police on these issues and also encourage tenants to report anti-social behavior to the police.

“Where reported incidents have led to a breach of the terms of a rental, we have pursued the legal remedies available to us.”

She added: “We will work with tenants to consider what additional steps we can take to improve security and access to the building.

“We work hard to maintain cleanliness levels in the common areas of the building and, in addition to our regular site inspections, we have installed CCTV cameras so that cases of fly and litter spills can be dealt with.”

South Wales Police Inspector Mark Watkins said: ‘In recent months we have received a number of concerning calls at Regency House, both from housing association Caredig and residents.

“These concerns primarily relate to suspected drug-related activities and anti-social behavior, all of which impact residents and the local community.

“We have made seven arrests in connection with drug-related activity at Regency House in the past eight weeks. All seven cases are ongoing and those arrested have been released pending further investigation.

“Residents should expect to see officers carrying out additional patrols and visits to the address over the coming weeks as we work in partnership with housing association Caredig, who have been extremely supportive of the measures taken by police to address residents’ concerns.”

Cllr David Phillips, whose Castle area includes Christina Street, said he noticed the ‘dirty’ state of Regency House during a leaflet distribution some time ago.

He said he took residents’ concerns to Caredig and the police.